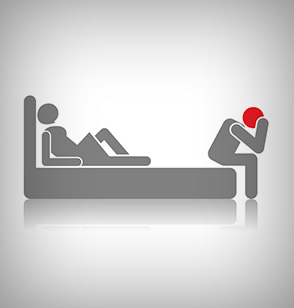 Several studies have found that one half or more couples have had or will eventually have sexual problems at some point in their relationship. Sexual problems are experienced because of individual differences – people are different in what they want and how often they want it!

weak, impotent or blind.Traditionally females get information regarding hygiene but never about their sexuality. Their information needs on sexuality are never met. This makes them believe that sex is for reproduction and not for pleasure.

While sexual dysfunctions rarely threaten physical health, they can take a heavy psychological toll, bringing on depression, anxiety, and debilitating feelings of inadequacy.

What is a sexual problem?

In general terms, a sexual problem is defined as difficulty during any stage of the sexual act (which includes desire, arousal, orgasm and resolution) that prevents the individual or couple from enjoying sexual activity.

To understand this we need to have information about the normal Human Sexual Response Cycle:

Human Sexual Response Cycle is a four phase model of physiological response during sexual stimulation. These phases, in order of their occurrence, are

Arousal Phase is the period of sexual excitement prior to orgasm. At this stage both males and females may begin to vocalize involuntarily by making sounds, grunting, moaning, etc.

Orgasm Phase is the conclusion of the Plateau Phase and is experienced by both males and females. In males, Orgasm is usually associated with ejaculation. It may also play a significant role in fertilization.

Resolution Phase Males and Females may not experience this refractory phase and further stimulation may cause a return to the Plateau stage. This allows the possibility of multiple orgasms in both sexes, especially in females.

In addition, refractory periods range from human to human, with some being immediate (no refractory) and some being as long as 12 to 24 hours.
Clik Here to More Information

Is the human sexual response cycle same in males and females?

It is indeed somewhat different in males and females. Males need to discharge or stop the activity once Orgasm is reached. Women however have the capacity to move to and fro from excitement, orgasm, and plateau phases. This difference between men and women requires complete understanding because a lack of understanding forces men and women to focus on “performance” in sexual intercourse having a negative impact and creating sexual dysfunctions.

What are the causes of sexual difficulties?

The causes of sexual difficulty may be physical, emotional, psychological or a combination of all three.

Physical factors include drugs (like antihypertensive, anti-histamines and some psycho therapeutic drugs), injuries to the back and large prostate problem with blood supply nerve damage and tertiary syphilis.

Emotional factors effecting sex include interpersonal problems such as lack of trust and open communication between partners.
Psychological factors include depression, sexual fears or guilt, past sexual trauma, etc.

How is lack of communication a cause for sexual problems?

Sex is a difficult topic to discuss, especially sexual problems. Most people have little experience talking about sex in an intelligent and mature manner. Inaccurate information about sexual health matter can lead to incorrect assumptions about the opposite sex.

What are some of the sexual challenges experienced by males?

What are some of the sexual challenges experienced by females?

For more information and queries drop a line to onlinedr@srhmatters.org

Female sexual desire naturally fluctuates over the years. Highs and lows commonly coincide with the beginning or end of a relationship, or with major life changes such as pregnancy, menopause or illness. If you are concerned by a low or decreased sex drive there are lifestyle changes and sex techniques that may put you in the mood more often.

According to some, studies more than 40% of females complain of low sexual desire at some point. Still researchers acknowledge that it is difficult to measure what is normal and what is not. If you want to have sex less often than your partner does, neither one of you is necessarily outside the norm for people at your stage in life, although your differences may cause you distress.

Similarly, if your sex drive is weaker that it once was, your relationship may be stronger than ever. There is no magic number to define low sex drive. It varies from woman to woman. Causes for low sex drive are based on a complex interaction of many components affecting intimacy including physical wellbeing, emotional well being, experiences, beliefs, lifestyles and current relationships. Alcohol and drugs, surgery, fatigue, menopause, pregnancy and breast feeding, and physiological causes such as anxiety, depression, physical appearance, low selfesteem, etc. are also causes of low sex drive.

There can be many reasons for this condition, such as hormonal imbalances, stress, drugs, sleep deprivation, etc.

The amount of sleep a man gets may also affect his libido. Sleep is necessary to help the body recharge and stay energized. A regular loss of sleep can result in a man being too tired to have sex. Getting at least eight hours of uninterrupted sleep a night can quickly boost a lowered libido.

Whether it be job, money, or relationship related, stress can have a big impact on your libido. When your body becomes stressed, it releases two main hormones called adrenaline and cortisol. These hormones are fine in normal doses, but if produced by the body too frequently, it can lead to chronic stress. Eventually these hormones begin to interfere with testosterone, causing a lowered libido.

You may be tempted to believe that alcohol increases your libido. However, chronic alcohol use can actually lower your libido. When you drink alcohol, it depresses many important parts of your body, including your hypothalamus and pituitary gland. These parts of your body regulate the function of your gonads. Once they become depressed by alcohol they can cause a noticeable drop in libido. Alcohol may also affect the blood vessels handicapping the body’s ability to achieve a firm erection.

Certain disease may also cause a noticeable drop in libido. These diseases include diabetes, cardiovascular disease, Parkinson’s disease and anaemia. Diseases that specifically attack the cardiovascular system are especially prominent causes of libido problems in men as they can affect the ability to achieve an erection.

Certain medications may also cause a drop in libido for men. Antidepressants and muscle relaxants are common causes of lowered libido in men. Illegal drugs can also lower a man’s libido, especially marijuana, cocaine and heroin.
Please contact a good urologist for a complete check up and appropriate management, and/or referral to an endocrinologist or psychologist.

Anorgasmia is when a woman is ready for sex, aroused but fails to reach an orgasm either during sexual intercourse with her partner or while performing self-masturbation. The major causes of anorgasmia include the following:

Following have been found useful in rectifying anorgasmia in females

Lack or absence of extreme pleasure as one ejaculates is called Anorgasmia. It is often related to delayed ejaculation in males. It is a sexual dysfunction and is often classified as a psychiatric disorder.

It can also be caused by some medical problems such as diabetes, thyroid gland dysfunction (thyroid is a small gland located in the front region of your neck), multiple sclerosis (a disease of nerves), trauma to the lower abdomen or genitals, genital area surgery, spinal cord injury (spinal cord is a string of nerve fibers coming down through your backbone, bringing signals from the brain), hormonal imbalances, etc. Effective treatment for anorgasmia depends on the cause. You have to visit a good urologist at a reputable hospital for complete checkup, management and referral to a psychologist or an endocrinologist.

This refers to a person’s approach to sex rather than the number of times they have sex. A hyper sexual individual is distinguished from other people by the compulsiveness with which he or she engages in sex. Hyper sexual individuals engage in sex repeatedly and compulsively usually finding little or no emotional satisfaction. They feel driven to have sex, looking for something in sex that they can never find.

Hyper sexuality interferes with the ability to deal with normal daily affairs and results in an inability to break a pattern of compulsive behavior.

Also called Dyspareunia this can occur in both males and females. In males the most common causes are prostate or bladder infection, or in uncircumcised males the foreskin of the penis being too tight, which causes pain during erection.
Dyspareunia in woman may be due to vaginal dryness, use of anti-histamine medication, use of tampons or water soluble lubricants, endometriosis, pelvic inflammatory disease, vaginal infections, allergies to semen, powders andspermicide. If the physical factors responsible for Dyspareunia are not addressed, it can lead to sexual problems like erectile problems in males and vaginismus in females.

Sexual Cephalgia is the occurrence of severe headaches during sex.
The headaches are generally caused by contractions of muscles and of blood vessels in the head, neck or upper body during intercourse. The headaches often disappear for weeks or months at a time and then suddenly reappear.