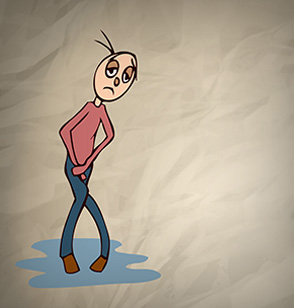 The prostate is a gland of the male reproductive system surrounding the urethra, the tube that carries urine out from the urinary bladder.

A young man’s prostate is about the size of a walnut. It slowly grows larger with age.The function of the prostate is to produce and store a milky white fluid that becomes part of semen, the fluid that carries sperm out during ejaculation.

The prostatic fluid mainly consists of sugars, proteins and other chemicals which help the sperm to survive inside the female’s body.

In females, the paraurethral gland, now called the female prostate gland is considered homologous to the male prostate.

The gland is also located around the urethra in females and expels fluid like the male prostate during orgasm.

Benign prostatic hyperplasia (BPH) occurs in older men, this is enlargement of the prostate to the point where urination becomes difficult.
Symptoms include needing to go to the toilet often (frequency) or taking a while to get started (hesitancy). If the prostate grows too large, it may constrict the urethra and impede the flow of urine, making urination difficult and painful and in extreme cases completely impossible.

BPH can be treated generally with medication, but under certain circumstances surgery that removes the prostate is needed.
The surgery most often used in such cases is called transurethral resection of the prostate (TURP or TUR). In TURP, an instrument is inserted through the urethra to remove prostate tissue that is pressing against the upper part of the urethra and restricting the flow of urine. The procedure is done under general anesthesia and usually takes 30 to 60 minutes.

This is the inflammation of the prostate gland, characterized by painful and frequent urination, lower back pain, generalized body aches and pains and sometimes fever.

This is usually caused by bacterial infection of the prostate gland. It is diagnosed by laboratory analysis of urine and sometimes the semen. The treatment involves general anti-inflammatory medicines and certain antibiotics.

This occurs due to various causes and is usually diagnosed after ruling out the infection. Treatment usually involves a variety of modalities such as certain medicines, physiotherapy, light-therapy and sometimes even surgery.

In these individuals, the prostate starts functioning faster than normal, hence producing more semen. When the person somehow decreases the frequency of ejaculation, the prostate becomes congested with semen and then, when the person sits in a the squatting position, his lower abdominal structures such as the bladder put pressure on the prostate, squeezing it and hence what is observed is discharge of semen like drops.

This condition settles down on its own after a few months. Sitting in a warm bathtub for 10-15 minutes daily will also reduce prostatic inflammation and provide some relief. However, if the condition persists, consultation with a urologist is recommended.

Prostate cancer is one of the most common cancers affecting older men and a significant cause of death for elderly men. Prostate cancer develops primarily in men over fifty. The cancer responds best to treatment when detected early.

The cancer of prostate is, in most cases, slow-growing and symptom-free. It however, may cause pain, difficulty in urinating, problems during sexual intercourse, or erectile dysfunction. Other symptoms can potentially develop during later stages of the disease.

The prostate regularly secretes a chemical in blood called Prostate Specific Antigen (PSA). Its blood levels increase considerably in the case of cancer and this increment, together with case history and physical examination of the patient helps in making the diagnosis.

Later a biopsy (laboratory analysis of a small chunk of prostate tissue) is needed to confirm the diagnosis, and determine the severity of the disease and respective mode of treatment.

The prognosis (chance of recovery) and treatment options from prostate cancer depend on the following:

Spread of Prostate Cancer in the body (Metastasis)

The three ways that cancer spreads in the body are:

Pelvic lymphadenectomy: A surgical procedure to remove the lymph nodes in the pelvis. A pathologist views the tissue under a microscope to look for cancer cells.

CT scan (CAT scan): A procedure that makes a series of detailed pictures of areas inside the body, taken from different angles. The pictures are made by a computer linked to an x-ray machine. A dye may be injected into a vein or swallowed to help the organs or tissues show up more clearly. This procedure is also called computed tomography, computerized tomography, or computerized axial tomography.

Seminal vesicle biopsy: The removal of fluid from the seminal vesicles (glands that produce semen) using a needle. A pathologist views the fluid under a microscope to look for cancer cells.
The information achieved from the above tests, plus the results of tissue biopsy and blood levels of PSA, help in determining the stage of the disease which in turn determines the prognosis and treatment options.

Watchful waiting is closely monitoring a patient’s condition without giving any treatment until symptoms appear or change. This is usually used in older men with other medical problems and early- stage disease.

Patients in good health are usually offered surgery as treatment for prostate cancer. The following types of surgery are used:

Hot flashes (A sudden, temporary onset of body warmth, flushing, and sweating), impaired sexual function, loss of desire for sex, and weakened bones may occur in men treated with hormone therapy. Other side effects include diarrhea, nausea, and pruritis (itching).

Some of the tests that were done to diagnose the cancer or to find out the stage of the cancer may be repeated. Some tests will be repeated in order to see how well the treatment is working. Decisions about whether to continue, change, or stop treatment may be based on the results of these tests. This is sometimes called re-staging.

Where to Seek Treatment

In Pakistan, all tertiary care hospitals have a Urology department that deals with cases of prostate problems. A Urologist is a surgeon and will further involve other specialists such as an Oncologist (cancer specialist) to treat prostate cancer.