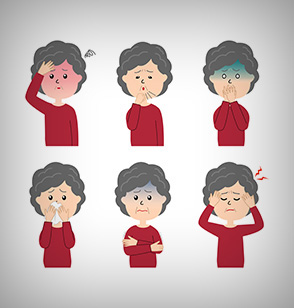 Menopause is the time in a woman’s life when her reproductive cycles end. In adult human females who still have a uterus, and who are not pregnant or lactating, post-menopause is identified by a permanent   (at least one year’s) absence of monthly periods or menstruation. It is part of a biological process that for most women is first noticed in their mid-forties.

It is the time in a woman’s life when the function of the ovaries   ceases; She is considered to be infertile and no longer in need to take into consideration the possibility of pregnancy.

Treatments for menopause are customized for each patient. Treatments are directed toward alleviating uncomfortable or

The process of menopause does not occur overnight, but rather is a gradual process. This so-called perimenopausal transition period is a different experience for each woman. In the perimenopause years, many women undergo noticeable and clinically observable physical changes resulting from hormonal fluctuations.

The most well-known effect of these is the “hot flash” or “hot flush”, a sudden temporary increase in body temperature. Other common effects encountered during the perimenopausal period include mood changes, sleep disturbances, fatigue, and memory problems.

Following but not all are experienced by post-menopausal women: