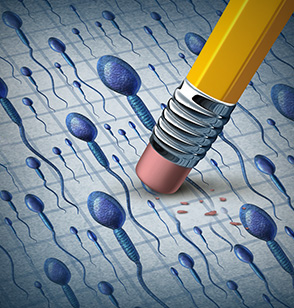 A couple is said to be infertile if

Women reach the peak of fertility in their early twenties. Couples in their twenties who are in good physical health and engage in regular sexual activity have about a 25% to 30% chance per month of conceiving.

Women in their thirties, particularly those over the age of thirty-five, have less than a 10% chance per month of becoming pregnant.

Infertility may be due to problems in the female, the male or a combination of both. In some cases, the cause is not known.

Following female factors may cause or contribute to infertility:

In about 15% of cases the infertility investigation will show no abnormalities. In these cases abnormalities are likely to be present but not detected by current methods.

Possible problems could be that the egg is not released at the optimum time for fertilization, that it may not enter the fallopian tube, sperm may not be able to reach the egg, fertilization may fail to occur, transport of the zygote (fertilized egg) may be disturbed, or implantation fails. It is increasingly recognized that egg quality is of critical importance and women of advanced maternal age have eggs of reduced capacity for normal and successful fertilization.

Recent research suggests that psychological issues, such as anxiety resulting from a lack of emotional support, can lead to hormonal problems that affect a woman’s fertility.

Male infertility is often caused by a low sperm count or an anatomical abnormality, such as a palpable dilation of veins in the scrotal area known as varicocele.
Other contributing factors can be attributed to how the sperm moves (motility), or an abnormal sperm type

What tests are used to diagnose infertility?

Typically, couples are seen together when diagnosing infertility. The doctor will take a note of the couple’s full medical histories and this will be followed by an examination.

They will also be asked about the use of prescribed or illegal drugs, alcohol and tobacco, and whether there is a family history of infertility or genetic disorders.

Women can expect questions about their menstrual history, the age of onset and any difficulties with menstruation. They will also be asked whether they have noticed milk leaking from their breasts.

Women may have to undergo a genital examination, as well as a cervical smear.
Blood tests are taken to measure prolactin levels and thyroid function and sometimes to test for certain hormone levels, such as progesterone and estradiol.
A post-coital test, which is similar to a cervical smear, may be required to see if the sperm can penetrate the cervical mucus.
Sometimes an ultrasound scan of the pelvis is taken to check for fibroids in the uterine cavity.
A laparoscopy may also be performed, in which a lighted camera is passed through a hole in the abdomen to look at the pelvic structures.
Occasionally, a hysteroscopy is required, in which a thin, lighted tube is passed into the uterus to directly examine it.

Men will be required to provide a semen analysis. They must abstain from sexual intercourse for three days before providing the sample.
Genetic blood test is performed to make sure that there are no chromosomal abnormalities or defective genes that could be passed on to potential offspring.
Blood tests also may be taken to determine levels of testosterone. 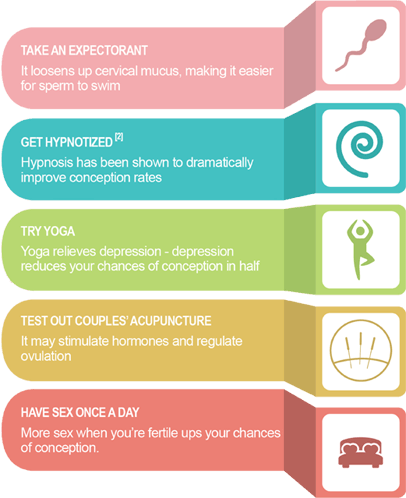 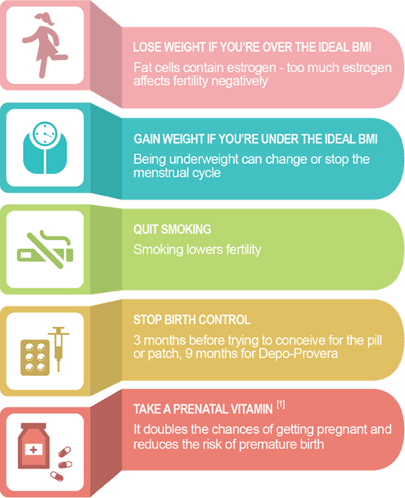 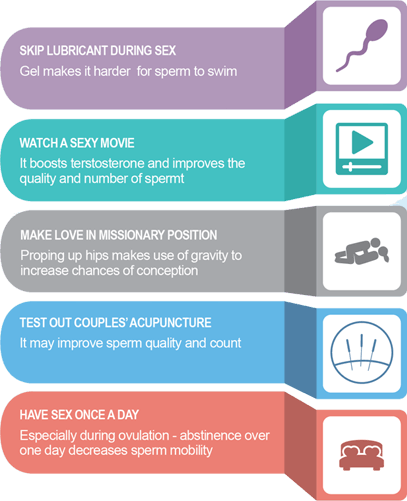 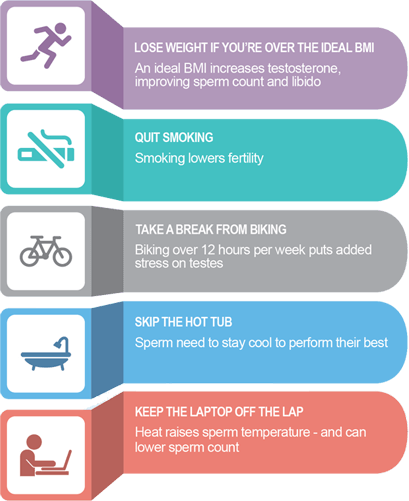 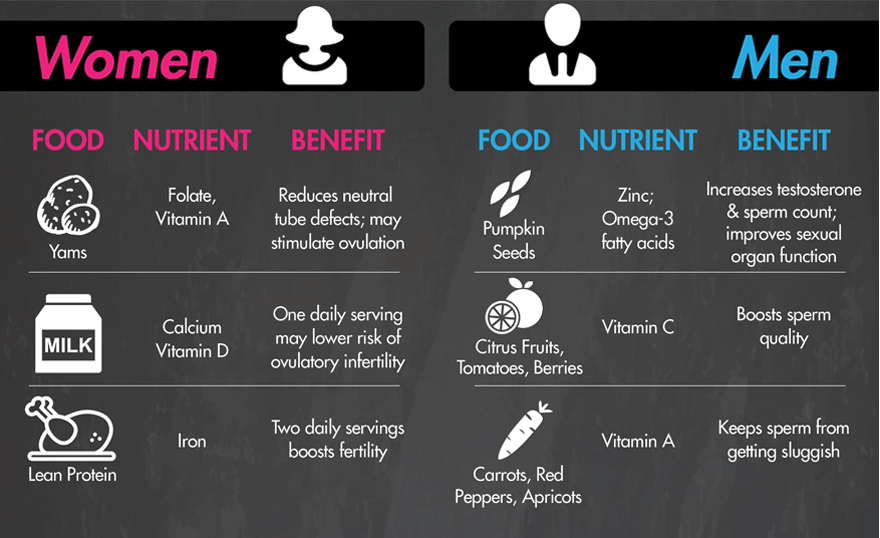 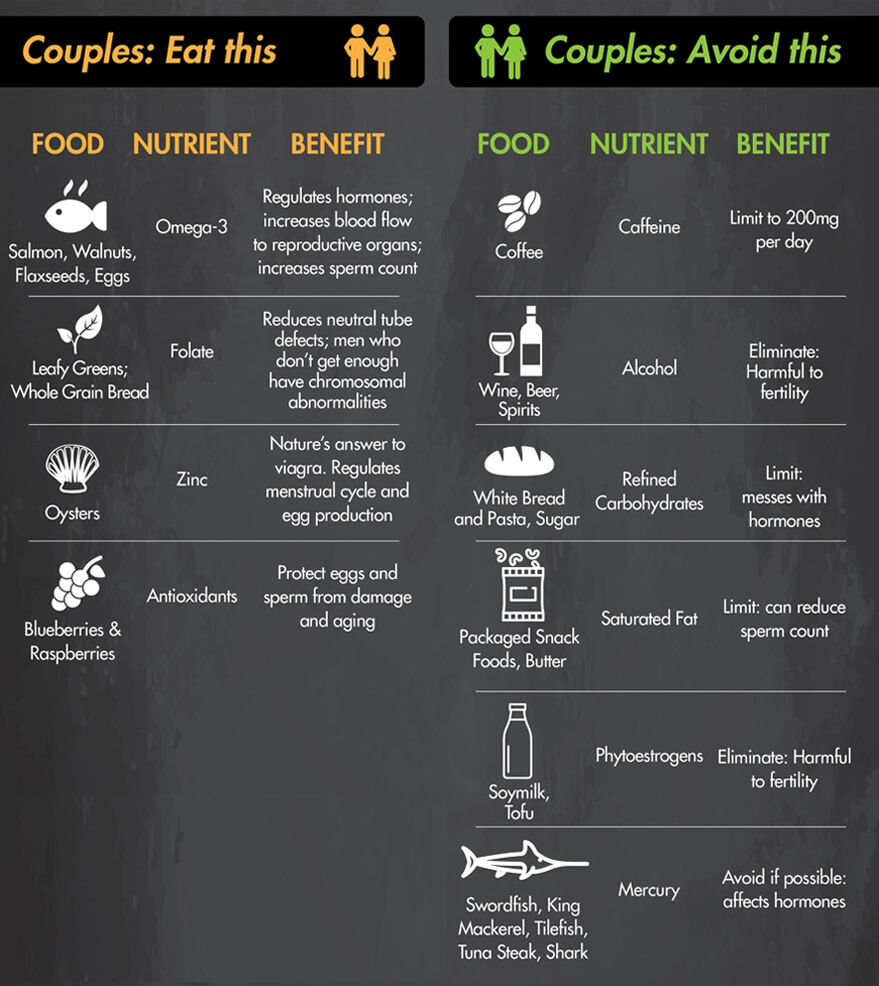 What treatments are available?

There are various treatment options for infertility available such as natural method i.e. intercourse should take place around the time of ovulation, infertility drugs, male-infertility treatment, and assisted reproductive techniques such as IVF, ICSI, GIFT, etc., that you can discuss with your infertility specialist according to your case.

There are herbs that may enhance sexual functioning in men and women. Most of these herbs are available in tablet form from health food shops. However, you should consult a qualified herbalist and check with your physician before taking them.

As anxiety may contribute to infertility, incorporate stress management techniques into your daily routine.

The importance of preconceptual care

If you are trying to get pregnant, regardless of the method, you should drink only in moderation, do not smoke and avoid any drugs other than those prescribed by your physician. Exercise only lightly and avoid hot tubs and saunas, as they may lead to a lowered sperm count or changes in ovulation. Be sure to get plenty of fresh fruit and vegetables into your daily diet, as they containfolic acid, which helps prevent neural tube defects in the baby.

Maintain an appropriate body weight, as being over or underweight can affect fertility. Also, make sure you receive a rubella vaccination if you have not already had one. It is important to note that pregnancy should be avoided for three months after a rubella immunization.