The Truth About Child Sexual Abuse 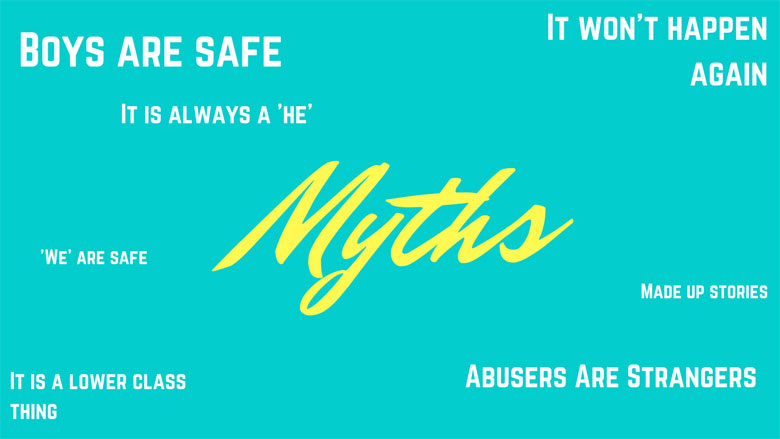 If you often find yourself calling an abuser ‘he’ or thinking of them as strangers with a creepy black hood on, then think again. A child sexual abuser can be a female, and they can be someone whom we know very well. They might be a close relative or a complete stranger, but you must identify them and warn your parents and peers immediately.

Abusers need to be exposed and the only way you can do that is by knowing the truth behind child sexual abuse.

So, today we are going to bust some of the most common myths related to sexual abuse:

Myth 1: Children are most often abused by males:

Fact: That is not true. In actuality, abuser can be a male or a female. According to a recent US study, one out of every five children is abuse by a female offender.

Fact: Child sexual abuse knows no boundaries. It occurs in all social and economic classes of society.  According to a report by Sahil – an NGO for child protection, 74% cases from the rural areas while 26% cases from the urban areas of Pakistan were reported during January to July 2017.

Fact: They’re at as much at risk as girls. In 2016, 850 cases were reported by male children in Pakistan which is still underestimated (Sahil, 2017). This is because in our cultures boys are expected to be tough and strong and its hardly believed that boys can also be the victims of sexual abuse.  .

Fact: It’s very rare for children to lie about sexual abuse. In fact they try to give many hints to their caregivers that indicate an abuse is taking place with them

Fact: It is very likely that abuser will abuse his/her victim again. Hence, it is very important to report the incident to someone you trust the most!