KATHMANDU (IDN) – 21-year old Pabitra Bhattarai is a shy young woman with a soft voice and a ready smile. But, ask her about sexual health services and the shyness vanishes in an instant as she speaks passionately of how youths of her country must have rights to such services. 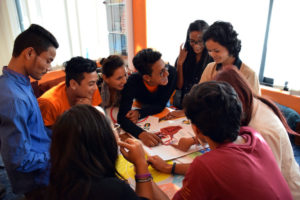 “Our country runs on the shoulders of young people. So, we can’t risk having a country full of young people with HIV. We must have full access to sexual and reproductive health services (SRHR),” she says, suddenly sounding far more mature than her age.

Yet, rhetoric alone doesn’t define Bhattarai who is already counseling and making aware hundreds of youths – most of them high school students – in SRHR. “I have been to over 20 schools in Bhaktapur, Kirtipur and Lalitpur,” she says.

On a late October morning, IDN catches up with Bhattarai and two other youths as they set out for a school to a government-run high school. The youths, trained and supported by Marie Stopes International (MSI) – a global organization working on SRHR – are part of a 10-member group called ‘Rocket and Space’ that aims to educate in and give access to SRHR to every youth of their city and region.

The youths try to flag down a taxi in Putali Sadak – a busy marketplace of Kathmandu. But soon they learn that there is a taxi strike in the city and the only vehicle available to them is a newspaper delivery van with no seats. This however fails to dampen their spirits as they readily sit on the floor of the van and start, ready for an hour-long drive to a government-run high school in Baudha neighborhood.

They have been invited by the principal of the school, Bhattarai reveals, to speak with the students in 11th and 12th grade about sexual health and hygiene. “They think we can do it better (than them),” she says with a tinge of pride in her voice.

An hour later, the three youths tumble out of the van and enter a fortress-like building of the government-run school. Sitting in two semi-dark rooms of the 3 stories building are about a hundred adolescent boys and girls. While her male colleagu Suraj meets the boys, Bhattarai and her female colleague Deepali Pradhan head for the girls room.

The school authorities have specially requested the volunteers to tell the girl students about menstrual hygiene, Pradhan informs. So, for next 45 minutes, the young women explain to their audience the process of menstruation: they start a conversation by asking the students what changes when they have their first periods.

The students typically look at each other and smile nervously. The youth workers encourage them to speak, saying, “Look, I am just like you, I am like your elder sister”. Slowly, a girl stands up and says “sprouting of breasts”. Bhattarai asks everyone to clap for student. With that, the ice begins to melt.

For the next 45 minutes, Bhattarai and Pradhan touch upon all aspects of menstruation: the expected physical changes, the cramps, the menstrual cycle and how to count it and the importance of maintaining hygiene during this cycle. “Their family members and their teachers feel embarrassed to talk about these things. And the girls also feel shy to ask. But when we talk, they listen. They think, we are their friends,” Pradhan says.

Batting for the Disabled

Dan Bahadur is 19 years old and physically challenged. Since May this year, he has been educating fellow youths with disability in his city on SRHR.

There are 3 million people with disability in Nepal today, says Bahadur, and nearly half of them young. Not long ago, they were socially ostracized, he says: “People looked down upon the disabled. They were seen as people who brought bad luck to others.” Today, however, there are special facilities for people with disability, including quota in educational institutions and government jobs.

Yet, when it comes to sexual health, the disabled people, especially youths are normally forgotten. Bahadur wants to change that, but so far, the goal has remained a big challenge. “People laugh at me when I talk of SRHR. Some think it is weird and even ask me, “do disabled people have normal sexual needs?”

There are, however, a lot of people who give him support. Many of them are from people with disability themselves, including players from the national Wheelchair Basketball Association – an institution promoting and campaigning for sportspersons with disability. Bahadur has met several players, made them aware of their SRHR rights, including contraception, abortion, counseling on sexual health and hygiene.

Nilima Raut, MSI’s Youth project manager explains, “The main slogan of the UN of Sustainable Development Goals itself is ‘Leaving No One Behind’ and in reaching out to disabled youths we are making an effort to achieve that.”

Talking Sex in a conservative society

Here are, however, challenges galore as Nepali society is largely conservative where premarital sex is a taboo. Vinuka Basnet, a 20-year old college student says that her parents were shocked when they came to know she was working as a sexual health worker. ‘They were embarrassed and afraid that now everyone would point at me and say “she talks of sex”. It took a long time for her to pursue her parents, she recalls.

Suraj Khadka says that since the school syllabus does not include sex education, students do not see his lessons as important enough. “They laugh and ask me questions that are irrelevant.” He, however, has a solution: “Let them laugh, but encourage them to ask what’s relevant to them.”

Others like Dan Bahadur often find communicating sexual health in their local language very challenging: “Take ‘nightfall’ for example. There are no synonyms for that in Nepali. Disabled youths who have spinal injury will have nightfall, but cannot feel it as they are paralyzed down the waste. It’s important for them, as well as for those who care for them to know this, so they can maintain cleanliness. But when I try to explain this, I am at loss of words,”

But, since success of the youth SRHR educators depends on their communication with their fellow youths, they have formulated innovative ways to overcome the communication barriers.

Vinuka Basnet shows off some of the tools that include coloured pictures of male and female anatomy and reproductive organs, posters, brightly colored T-shirts and bracelets with slogans such as “No condom, no sex” and “I am a rock star”.

They carry these tools with them at every meeting. While the posters and the pictures are used to educate the youths, the shorts and the bracelets are distributed among the attendees for positive and enthusiastic response.

Yet, latest statistics show that Nepal (27.5%) still has a very high unmet need for contraception in the Asia region. In terms of unmet need indicator, at least 14% and 12% of married or in-union women of reproductive age, in Southern Asia and South-Eastern Asia want to delay or avoid a pregnancy and are not able to do. Also, almost half the population is unaware that abortion is legal in the country.

This is where the youth health volunteers are making a big contribution, taking SRHR to the most vulnerable and needy sections of the society: migrant workers, slum dwellers and young women whose husbands have gone abroad to work as migrant workers.

23-year old Kavita Chulagani is a young mother whose husband works in the Middle East as a driver. Kavita uses vaginal implants as a contraceptive, which she received for free at a clinic run by the Meryl Stopes clinic. It would have been very difficult for me to access this,” says the young mother who lives in a slum in the city outskirts, “but the youth workers directed me to this place. Now I am telling women of my neighborhood to come here too,” she says.

According to Raut, there has been over 100% increase in the demand for SRHR services since the youth project started. “There are still a lot of people to reach, but the increasing demand gives us hope,” she concludes. [IDN-InDepthNews – 24 November 2016]

Photo: Youths of Rocket and Space group in Kathmandu brainstorm on how to make their presentations on Sexual and Reproductive Rights more effective. Credit: Stella Paul | IDN-INPS