Getting Over a Dry Spell

Though many are embarrassed to admit it, lots of guys go through a dry spell from time-to-time. It’s normal. Sometimes it’s when he gets dumped by someone he really liked. He walks around in a cloud. He’s bitter about relationships. Or he just might need to get his mojo back. There’s trying to cope after a bitter divorce. Then there are those guys who are amazing but people seem to never notice. And the guy who was a catch but got sucked into a career and now has no time to meet anyone. You could have even moved to a new city and just haven’t run into anyone with potential. Whatever your situation, don’t fret. You can and will get over a dry spell and will be overwhelmed with a lover’s affections before you can say “Ah.” First, take notice of where you are right now mentally and physically (care2.com). From the physical standpoint, do you need to take part in a little exercise? Perhaps eat healthier and get more sleep. Try to change up your regime. The truth is, other people want to be with someone attractive as much as you do. Thankfully, men generally aren’t  evaluated as strictly. But still, everyone wants to be with someone who takes care of themselves.

Now what about mentally? If you are moping around depressed or anxiety ridden, you aren’t going to look attractive. People are drawn in by confidence, energy and passion. Do not change your personality, but if you are depressed explore why and get some help in managing it, and bringing it under control. What happened recently in your love life? Are you still getting over an ex? If it’s been a couple of months, realize that not every breakup is the same. Some take longer to get over than others. But it’s important to get out there and start fresh, rather than to wallow in self-pity. Make it a point to take stock. See what singles are out there. Who would be into you? Practice flirting. Express confidence. Be relaxed with who you are. Project your better qualities. Are you funny, witty, smart, inspiring or passionate? Let it shine through when interacting with anyone you are interested in. Show them your best side. Dress the part. People love a guy who looks good and smells good. Get yourself some good cologne. Be subtle with it. Don’t go overboard or you’ll turn them off. Elicit friends to set you up on blind dates. Try online dating. Lots of people are on there. You’re bound to find someone into you sooner or later. Find out where the cool places are if you’ve moved to a new city and strike up a conversation with someone who you will have something in common with. It’s all up to you. But don’t sit around waiting for it to happen, get out there and mix it up. It will happen for you. 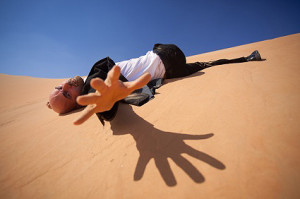