Reproductive coercion is abuse. But many women don’t even know it

Studies are revealing the shocking extent of abuse in which a woman’s reproductive choices are controlled by another. 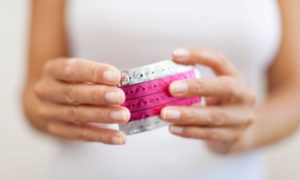 Just when we thought we’d heard it all, along comes evidence of yet another way that men are controlling women, denying them bodily autonomy and sexually abusing them. It’s one you might not have heard of; certainly it’s been little discussed and does not appear to have been highlighted by the #MeToo movement. Arguably though, it has a far more serious and potentially life-changing impact on women’s lives than many of the abuses that movement has documented. It’s called reproductive coercion and, as a shocking new report in the journal BMJ Sexual & Reproductive Heath has found, as many as one in four women presenting at sexual health clinics is a victim of it.

Reproductive coercion is not a new phenomenon. But it was very recently recognised as a distinct type of domestic abuse, and only defined as a concept in 2010, in a study in the journal Contraception. It describes a type of abuse in which someone else controls your reproductive choices, such as deciding whether you can use contraception, choose to become pregnant, or continue with a pregnancy. This can manifest as either psychological abuse or physical violence, or both, and ranges from emotional blackmail to sabotaging contraception to, at the extreme end, deliberately bringing on an abortion by spiking a woman’s food or drink.

The new BMJ report reviews all the currently available evidence and brings it up to date, collating information from worldwide medical and social sciences research databases. It reveals that the problem is more common than previously acknowledged, and that younger women are particularly vulnerable to it, as (in the US at least) are black and ethnic minority women. And it shows that while male partners are predominantly responsible for acts of reproductive coercion, they’re not the only perpetrators. In some cultures, other family members, particularly older female relatives, frequently interfere with another woman’s reproductive autonomy.

Reproductive control covers such a wide spectrum of behaviour that many women might not realise they’ve been a victim of it, not least because some of its myriad forms present passively, or very subtly. Take your friend who confides to you that her boyfriend hates wearing condoms and sweet-talks her until she’ll let him have sex with her without, because it feels so much nicer, and she gives in because he really loves her, and she knows she can trust him … Or the woman unlucky enough to have sex with a man who covertly removes his condom midway during sex, without her consent or knowledge – an act known as “stealthing” – and which he (and perhaps she) probably doesn’t know is a form of rape, for which men have been convicted.

And then there’s the guy who lied to you about having had a vasectomy, or the one who swore on his life that he’d withdraw during unprotected sex but “got carried away in the moment”. And the bloke who said he’d break up with his girlfriend if she didn’t have an abortion, so she did, even though she wanted the baby. Conversely, there’s the man who wanted a(nother) child, when his partner did not, who pierced holes in the condoms and feigned surprise when she became pregnant.

There are still, it seems, an awful lot of men who like to keep their women “barefoot and pregnant”. Perhaps that casual, jokey attitude to reproductive control is part of the problem. Recently, Saturday Night Live cast member Pete Davidson quipped about messing around with his (now ex) fiancee, Ariana Grande’s birth control. “Last night I switched her birth control with Tic Tacs,” he said. “I believe in us and all, but I just want to make sure that she can’t go anywhere.” Hilarious.

And last year, actor Ian Somerhalder brazenly admitted he’d decided to start a family with wife Nikki Reed by taking the birth control pack from her purseand throwing the pills in the toilet. Yes, women have been known to do this type of thing too, most famously in the case of notorious columnist, Liz Jones, who confessed to being so desperate for a baby that she had stolen her (then) husband’s sperm from his used condoms in the dead of night, and inseminated herself. But she represents a tiny minority. The reason is blindingly obvious: it’s mainly women who suffer the consequences of reproductive abuse. They’re the ones who need a prescription for the morning-after pill, who need to go through abortions, get pregnant, endure childbirth. They’re the ones who are kept in poverty by having unwanted children, who can’t get a job or improve their education.

Like all forms of sexual abuse, this isn’t about sex, it’s about power. The BMJ report calls for more international research on the non-physical elements of abusive relationships and into how coercive control can be resisted. GPs and other health workers need to be more aware of it, and women need to be able to spot the signs so they can get out, or get help. The pill might be almost 60 years old, but we still have a long way to go before we’re in total control over our own reproductive lives.

• Hilary Freeman is a journalist and author