When a Partner Dies, Grieving the Loss of Sex

After Alice Radosh’s husband of 40 years died in 2013, she received, in addition to the usual condolences, countless offers of help with matters like finances, her car and household repairs. But no one, not even close friends or grief counselors, dared to discuss a nagging need that plagues many older women and men who outlive their sexual partners. 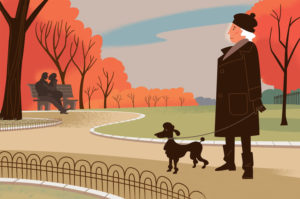 Dr. Radosh, 75 and a neuropsychologist by training, calls it “sexual bereavement,” which she defines as grief associated with losing sexual intimacy with a long-term partner. The result, she and her co-author Linda Simkin wrote in a recently published report, is “disenfranchised grief, a grief that is not openly acknowledged, socially sanctioned and publicly shared.”

“It’s a grief that no one talks about,” Dr. Radosh, a resident of Lake Hill, N.Y., said in an interview. “But if you can’t get past it, it can have negative effects on your physical and emotional health, and you won’t be prepared for the next relationship,” should an opportunity for one come along.

Yes, dear readers of all ages and the children of aging parents, many people in their golden years still have sexual urges and desires for intimacy that go unfulfilled when a partner becomes seriously ill or dies.

“Studies have shown that people are still having and enjoying sex in their 60s, 70s and 80s,” Dr. Radosh said. “They consider their sexual relationship to be an extremely important part of their lives. But when one partner dies, it’s over.”

Yet a report published by the United Kingdom’s Department of Health in 2013, the National Service Framework for Older People, “makes no mention of the problems related to sexual issues older people may face,” Dr. Radosh and Ms. Simkin wrote in the journal Reproductive Health Matters. “Researchers have even suggested that some health care professionals might share the prejudice that sex in older people is ‘disgusting’ or ‘simply funny’ and therefore avoid discussing sexuality with their older patients.”

Dr. Radosh and Ms. Simkin undertook “an exploratory survey of currently married women” that they hope will stimulate further study of sexual bereavement and, more important, reduce the reluctance of both lay people and health professionals to speak openly about this emotionally and physically challenging source of grief.

As one therapist who read their journal article wrote, “Two of my clients have been recently widowed and felt that they were very unusual in ‘missing sex at my age.’ I will use your article as a reference for these women.”

Another wrote: “It got me thinking of ALL the sexual bereavement there is, through being single, through divorce, through disinterest and through what I am experiencing, through prostatectomy. It is not talked about.”

Prior research has “documented that physicians/counselors are generally uncomfortable discussing sex with older women and men,” the researchers noted. “As a result, such discussions either never happen or happen awkwardly.” Even best-selling memoirs about the death of a spouse, like Joan Didion’s “The Year of Magical Thinking,” fail to discuss the loss of sexual intimacy, Dr. Radosh said.

Rather than studying widows, she and Ms. Simkin chose to question a sampling of 104 currently partnered women age 55 and older, lest their research add to the distress of bereaved women by raising a “double taboo of death and sex.”

They cited a sarcastic posting from a woman who said she was not a good widow because “a good widow does not crave sex. She certainly doesn’t talk about it…. Apparently, I stink at being a good widow.”

The majority of survey participants said they were currently sexually active, with 86 percent stating that they “enjoyed sex,” the researchers reported. Nearly three in four of the women thought they would miss sex if their partner died, and many said they would want to talk about sex with friends after the death. However, “76 percent said they would want friends to initiate that discussion with them,” rather than bringing it up themselves.

Yet, the researchers found, “even women who said they were comfortable talking about sex reported that it would not occur to them to initiate a discussion about sex if a friend’s partner died.” The older the widowed person, the less likely a friend would be willing to raise the subject of sex. While half of respondents thought they would bring it up with a widowed friend age 40 to 49, only 26 percent would think to discuss it with someone 70 to 79 and only 14 percent if the friend was 80 or older.

But even among young widows, the topic is usually not addressed, said Carole Brody Fleet of Lake Forest, Calif., the author of “Happily Even After” who was widowed at age 40. In an interview she said, “No one brought up my sexuality.” Ms. Fleet, who conducts workshops for widowed people, is forthright in bringing up sex with attendees, some of whom may think they are “terrible people” for even considering it.

She cited “one prevailing emotion: Guilt. Widows don’t discuss the loss of sexual intimacy with friends or mental health professionals because they feel like they’re cheating. They think, ‘How can I feel that?’ But you’re not cheating or casting aspersions on your love for the partner who died.

“You can honor your past, treasure it, but you do not have to live in your past. It’s not an either-or situation. You can incorporate your previous life into the life you’re moving into. People have an endless capacity to love.”

However, Ms. Fleet, who remarried nine years after her husband died, cautioned against acting precipitously when grieving the loss of sexual intimacy. “When you’re missing physical connection with another person, you can make decisions that are not always in your best interest,” she said. “Sex can cloud one’s judgment. Maybe you’re just missing that. It helps to take sex out of the equation and reassess the relationship before becoming sexually intimate.”

Dr. Radosh urges the widowed to bring up grief over the loss of sexual intimacy with a therapist or in a bereavement group. She said, “Even if done awkwardly, make it part of the conversation. Let close friends know this is something you want to talk about. There is a need to normalize this topic.”