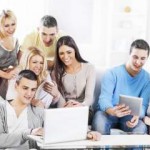 That little zing you get when someone “likes” your picture or sings your praises on Facebook? That’s the reward center in your brain getting a boost.

And that response can predict how much time and energy you put into the social media site, according to new research.

In one of the first studies to explore the effects of social media on the brain, scientists led by Dar Meshi, a postdoctoral researcher at the Freie Universität in Berlin, imaged the brains of 31 Facebook users while they viewed pictures of either themselves or others that were accompanied by positive captions. The research was published in Frontiers in Human Neuroscience.

“We found that we could predict the intensity of people’s Facebook use outside the scanner by looking at their brain’s response to positive social feedback inside the scanner,” says Meshi. Specifically, a region called the nucleus accumbens, which processes rewarding feelings about food, sex, money and social acceptance became more active in response to praise for oneself compared to praise of others. And that activation was associated with more time on the social media site.

Social affirmation tends to be one of life’s great joys, whether it occurs online or off, so it’s not surprising that it would light up this area. Few people are immune to the lures of flattery, after all. But do these results suggest that the “likes” on Facebook can become addictive? While all addictive experiences activate the region, such activation alone isn’t sufficient to establish an addiction.

It does, however, raise the interesting possibility that these affirmations might be the first step toward an addiction for some people, since Facebook use also shares another property common to addictive behaviors. On the social media site, the pleasure deriving from attention, kind words, likes, and LOLs from others occurs only sporadically. Such a pattern for rewards is far more addictive than receiving a prize every time, in part because the brain likes to predict rewards, and if it can’t find a pattern, it will fuel a behavior until it finds one. So if the rewards are random, the quest may continue compulsively. “Our research is a nice first step in making the neurobiological link between social media addiction and reward activity in the brain,” says Meshi.

Facebook may draw people in by making them feel connected— but it keeps them coming back because so many of us take pleasure in knowing that we’re liked.