We don’t want no sex education

In the age of the Internet, gender, sexuality, puberty and sexual health remain taboo topics in schools and homes.-Vangmayi Parakala 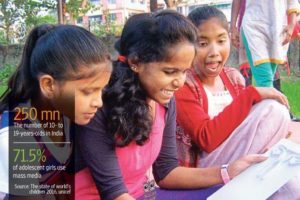 During a workshop on puberty awareness targeted at 10- to 12-year-old boys, sex educator Anju Kishinchandani was faced with a curious situation. When they were talking about the growth of pubic hair, one of her students thought he would have to stop going to school. Perplexed, she asked him why, and he said that since he wore shorts to school, hair might grow out from under them.

“We take for granted that the child would know things. But (puberty) is completely new for them. It can cause so much worry,” says Kishinchandani, who conducts workshops in Mumbai schools and neighbourhoods through her company, Out of the Box. These include a “My Body is Mine”, a child-friendly workshop for five- to eight-year-olds, and “Let’s Talk”, a complete sex education session for 13- to 15-year-olds, designed to encourage informed decision making.

A report on sexuality education in India by the Youth Coalition for Sexual and Reproductive Rights, an international organization, noted that “most schools—private and public-affiliated state boards of secondary education—don’t have any form of sexuality education in their curricula”. The Adolescence Education Programme (AEP) launched by the government in 2005 ran into trouble with state governments and didn’t quite take off. Three years ago, in a vision document for education in Delhi schools that the Bharatiya Janata Party’s Harsh Vardhan prepared in the run-up to assembly elections, he stated that “So-called ‘sex education’ (is) to be banned”. A year later, Harsh Vardhan, who became Union health minister for a while, added that he “wholeheartedly supported pedagogy that is scientific and culturally acceptable”.

The magnitude of the problem is all too visible. According to Unicef’s “The State Of World’s Children, 2016” report, India’s adolescent population (10- to 19-years-old) is over 250 million. That’s a lot of children who have to rely on misinformation, misdirected peers, pornographic material that is sexist and demeaning, and risqué Bollywood and regional cinema, to find out about the birds and the bees. Of them, the report reveals, around 71.5% of adolescent girls and 88.2% of adolescent boys use mass media.

There are, however, a handful of non- governmental organizations, parents and educators keen to hold constructive and informative conversations with children. Delhi-based not-for-profit Talking About Reproductive and Sexual Health Issues (Tarshi), for instance, has been running a helpline for sexual and reproductive health since 1996. It conducts workshops, issues publications, holds e-learning courses on sexuality, and engages with organizations to highlight the importance of such learning for young people.

“There has been a general denial of access to information on sexuality and bodies and this is especially acute with regard to younger women and girls,” says Vinita Sahasranaman, director of programmes and advocacy at the YP Foundation, a youth organization set up in 2002 to influence policy on issues of gender and sexuality, art, health and education.

The Thoughtshop Foundation, set up in 1993, creates communication tools for those working on issues like gender equity and adolescent health. It is run by Himalini Varma, a designer from the National Institute of Design, Ahmedabad, along with fellow designer Santayan Sengupta.

Over the years, Varma has found that well-meaning health workers, even those with decades of on-ground experience, are uncomfortable discussing topics of reproductive health with adolescent girls. The problem is a complex one, tinged with social taboos, assumptions that children will figure things out eventually and, paradoxically, that they aren’t old enough for this information.

Their kits are picture-intensive, with a storyline and easily relatable characters designed to address children from differing educational backgrounds. Their two adolescent health kits—“Champa” for girls, and “Shankar” for boys—which initially came out in Bengali, are also available in Telugu and Hindi now. “We design our kits keeping in mind not just the end recipient (the children), but also the grass-roots users (trainers),” says Varma. She recounts a session when a card with the picture of a teenage girl holding a little baby fostered a discussion on issues of child marriage and teenage pregnancy, as the adolescent girls related it to events in their own lives.

The YP Foundation follows a “peer educator model” for its target audience—marginalized young people, in institutional homes and government schools. “We induct and train older young adults, say 15- or 16-year-olds, to (conduct) sessions with us. This is premised on the comfort level that a peer group shares. We (have) observed that children clarified misconceptions around menstruation with less hesitation with peers than with much older adults,” Sahasranaman says.

“The backlash begins only with contentious issues like shame around menstruation, education on gender relations, sexually transmitted infections (STI), or contraceptives,” she says.

Despite this, sexual health educators like to keep things real. Gaurav Kumar, 22, currently a postgraduate student at Delhi University, facilitated sex-education sessions at a private New Delhi school for children of classes IX-XII in the last academic year. His sessions brought up several topics—sexual and reproductive health, awareness of the rights of sexual minorities, the relation between law and sexuality, the issue of Section 377 of the Indian Penal Code and notions of “natural” versus “unnatural” sex. Kumar’s programme at the school also included organizing sessions with activists and film-makers such as Pramada Menon.

“The focus was to make the students more aware and to sensitize them to these issues, even as they are growing up. To do this, I would also bring in pop-culture references, especially stories of celebrities that the kids would read about often. Because the challenge was to make the topics interesting and relatable in a non-awkward way,” says Kumar.

To keep pace with India’s children—literally, the country’s future—sexual health experts are constantly and rapidly modifying their ways of reaching out and providing healthy, much needed information. Regardless of whether they work in rural or urban areas, trainers say the children are brimming with curiosity and ready for information. The question is, are we willing to provide it to them?