Blaming others can ruin your health 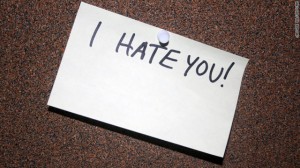 During his sophomore year in college, he says, white students harassed him and the only other African-American living on the floor in his dorm in order to get them to move out.

The white students spat on their doors, tore their posters off the wall, and banged on their door at four in the morning. When Benton brought up the problems at a dorm meeting, the other students snickered.

“I felt like I was being bullied, being targeted,” he says now of his college experience 19 years ago. “I knew I couldn’t retaliate in any way or I’d lose my basketball scholarship.”

This was the first time in his life Benton had encountered racism and it hit him hard. He had trouble sleeping, and then over the next several months he suffered panic attacks. Admitted to the hospital, he was found to have hypertrophic cardiomyopathy, or thickening of the muscles in the heart. The disease is the leading cause of heart-related sudden death in people under 30.

So sick he couldn’t walk, Benton lay in his hospital bed bitter and resentful.

“I thought to myself, ‘I’ve never hurt anybody. I serve in the community. I work with youth. I wrestled with God — why did this happen to me?'” he remembers.

Just then, a janitor walked by and grabbed Benton’s hand, and prayed aloud to God to heal him. “As soon as she said, ‘Amen,’ I felt like someone had poured cold water on my head and made my heart shrink,” he says.

Benton forgave the students who had tormented them, and three days later, he walked out of the hospital. “If I hadn’t forgiven them, I’d be dead,” says Benton, now healthy and a social worker for the Philadelphia Department of Human Services.

Feeling persistently resentful toward other people — the boss who fired you, the spouse who cheated on you — can indeed affect your physical health, according to a new book, “Embitterment: Societal, psychological, and clinical perspectives.”

In fact, the negative power of feeling bitter is so strong that the authors call for the creation of a new diagnosis called PTED, or post-traumatic embitterment disorder, to describe people who can’t forgive others’ transgressions against them.

What bitterness does to your body

Feeling bitter interferes with the body’s hormonal and immune systems, according to Carsten Wrosch, an associate professor of psychology at Concordia University in Montreal and an author of a chapter in the new book. Studies have shown that bitter, angry people have higher blood pressure and heart rate and are more likely to die of heart disease and other illnesses.

Physiologically, when we feel negatively towards someone, our bodies instinctively prepare to fight that person, which leads to changes such as an increase in blood pressure. “We run hot as our inflammatory system responds to dangers and threats,” says Raison, clinical director of the Mind-Body Program at Emory.

Feeling this way in the short term might not be dangerous — it might even be helpful to fight off an enemy — but the problem with bitterness is that it goes on and on. When our bodies are constantly primed to fight someone, the increase in blood pressure and in chemicals such as C-reactive protein eventually take a toll on the heart and other parts of the body.

“The data that negative mental states cause heart problems is just stupendous,” Raison says. “The data is just as established as smoking, and the size of the effect is the same.”

How to get rid of bitterness

It’s impossible to avoid all events that could turn you bitter. At some point, all of us will be the victim of a crazy boss, a cheating spouse, a spiteful co-worker, or someone else who does us wrong. Some will be even more unlucky, and suffer physical or sexual abuse.

“There are situations where you’d have to be the Dalai Lama not to feel bitterness,” says Raison, who writes regularly for CNN.com on the mind-body connection for health.

The key is how we react to these situations in the long term.

Here are five tips for how to let go of bitterness as quickly as possible for the sake of your own health.

1. Gripe for a while

“Give yourself time to vent and get it out of your system,” suggests Dr. Maryann Troiani, co-author of the book Spontaneous Optimism.

Frederic Luskin, director of the Stanford Forgiveness Project, tells his embittered patients to think about how many others have had bad things happen to them.

“I ask people to watch the news for a day, or read the paper, or go to work and talk to people, and they’ll see that others have suffered and this is just a part of life,” says Luskin, author of the book “Forgive for Good.”

Troiani says some of her patients have found solace in doing this. Other times, however, it can backfire.

“Some ex-spouses are real psychopaths, and hunting them down can be disastrous,” she says. “They’ll just connive and twist things around and blame you.”

If that’s your situation, try writing a letter to the person and reading it to a trusted friend, she suggests.

4. Realize you’re only harming yourself

Keep reminding yourself of the all the physical harm you’re doing yourself by remaining bitter.

“I tell my patients, take care of this bitterness now, or in five years it will haunt you in the form of chronic headaches, fatigue, arthritis, and backaches,” Troiani says.

5. Consider the other person’s mental state

Author Maya Angelou has every reason to feel bitter. Raped as a child, then overwhelmed with guilt when her rapist, an uncle, was murdered by another family member, she was mute for several years. Still, she says she never felt bitterness toward her attacker.

“Although he was a child molester and abused me, I never hated him, and I’m glad of that,” she says. “What I realized is that people do what they know to do — not what you think they should know.”

As an adult, she’s continued that mind-set.

Don’t be a doormat

Taking these steps and losing your bitterness does not mean you should be a doormat, Raison says.

For example, consider the classic case of the wife whose husband leaves her for a much younger woman. Instead of feeling angry, she can think about moving on with her life and finding someone new.

“What happens is that the husband who’s been doing the 20-year-old comes crawling back because now his wife looks really good, and the wife can say, ‘You’re a day late and a dollar short,'” he says.