Including how they don’t have to wreck your sex life. 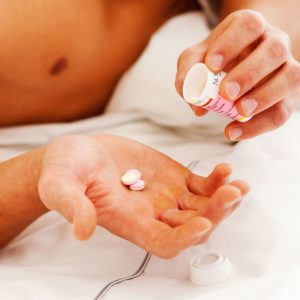 Last Tuesday was bittersweet. One of my “guys,” a 29-year-old writer, came in for his final session. He was better. When we’d met he’d never seen a psychiatrist and never thought he’d take a medication. “I hear they are addictive, and the side effects…I don’t want to be a zombie.”

Misperceptions about psychiatric medications and mental health treatment kill a lot men. While we have half the risk of depression compared to women, we are four times as likely to die by suicide. I’ve helped hundreds of men with mental health concerns and for many, medications are a part of the path to recovery. A few of the facts I wish men knew about them:

1. Sexual side effects are variable and manageable.

A few antidepressants, namely Wellbutrin (bupropion), Remeron (mirtazapine), and St. John’s Wort, have no sexual side effects. You can also consider taking a medication holiday—the half-life of most antidepressants is 24 to 36 hours (talk to your prescriber before taking days off). Finally, there are medications like Viagra and Cialis if an antidepressant medication is necessary but causes sexual dysfunction.

Depression is not just a disease of sadness. Instead of being tearful, some men get irritable, isolated, and sleepless. Most antidepressant medications influence serotonin, and can help with those symptoms. In addition, this molecule is involved in more than our moods, namely our sex drive, appetite, sleep, cognition, and creativity. Men are often poor judges of the effects of depression on our own lives. So don’t just consider the medications’ effects on your mood; they can have a much more global impact on your functioning.

Look, I take no money from big pharma. I’ve treated folks with depression for almost two decades. Medications don’t work for everyone, but they work. I like to start with low doses and try to avoid complex combinations of medications i.e. “polypharmacy”. Many people have had side effects from medications like weight gain, increased anxiety, and sedation, but many have none. Still, in the right hands, there is little as powerful or rapidly helpful as medications for certain mental health concerns like severe depression, insomnia, and feelings of suicidality.

Patients assume that meds are my first move as a psychiatrist – and sometimes they are. But treatment today is about preference, options, and empowerment. Many things have an antidepressant effect. Talk therapy, lifestyle changes (sleep, exercise, eating right, reducing alcohol consumption), mindfulness and a few supplements all have evidence they help. Medications can help these other options to work. Engaging in psychotherapy and healthy lifestyle changes is much easier without severe symptoms.