10 Questions Men Should Definitely Ask Their Doctors About Testosterone

Before you buy into the myth that “real men” have high testosterone levels, make sure you know the facts. CLAIRE GILLESPIE 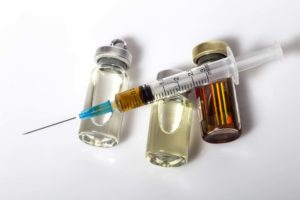 Perhaps you’ve tried natural ways to boost your libido and they haven’t worked. Or maybe you’re concerned about aging and are tempted by the “miracle cure” testosterone booster that will keep you young forever (we’ve all seen the ads). But it’s important to look beyond clever marketing campaigns if you’re considering testosterone medication. Before you self-diagnose with low testosterone, here are the questions you need to ask yourself.

Derived from cholesterol, testosterone is a steroid hormone, called an androgen, mainly secreted by the testicles in men but also (in much smaller amounts) by the adrenal cortex and ovaries in women. A male fetus begins to produce testosterone as early as seven weeks after conception. Testosterone levels rise during puberty, peak during the late teens to early 20s, and then level off. After age 30 or so, it’s normal for a man’s testosterone levels to decline slowly, but steadily, each year. According to the National Institutes of Health (NIH), testosterone is an important male hormone, regulating sexual development, muscle mass, and red blood cell production. Synthetic testosterone was first used as a clinical drug as early as 1937, and is now widely prescribed to men whose bodies naturally produce low levels.

The levels at which testosterone deficiency becomes medically relevant still aren’t well understood, according to the NIH, though it’s not just an issue for older men: Testosterone is one of the eight sexual health conditions millennial men need to be talking about. Normal testosterone production varies widely in men, and levels of the hormone fluctuate throughout the day—they’re usually highest in the morning. Although there is no standard definition of “low” testosterone—commonly referred to as “low-T”—the Mayo Clinic says a healthy range for an average adult male (30-plus) is between 270 and 1,070 nanograms per deciliter of blood. Possible symptoms of low-T, according to the NIH, include reduced sex drive, erectile dysfunction or impotence, increased breast size, lowered sperm count, hot flashes, depression, irritability and inability to concentrate, shrunken and softened testes, loss of muscle mass or hair, and bones becoming prone to fracture.

How is low-T diagnosed?

Most men have more than enough testosterone, but in some men, the body doesn’t produce enough of the hormone, which leads to a condition called hypogonadism. A blood test can tell your doctor how much free testosterone is circulating in your blood, and also show the total amount of the hormone in your body. However, according to the Endocrine Society in clinical practice guidelines published in The Journal of Clinical Endocrinology & Metabolism, low-T should be diagnosed “only in men with consistent symptoms and signs and unequivocally low serum testosterone levels.” The guidelines advise against screening men in the general population to avoid labeling—and medicating—otherwise healthy men “for whom testing, treatment, and monitoring would represent a burden with unclear benefit.”

Is low-T an inevitable part of aging?

When women go through menopause their estrogen levels plummet and stop almost completely. However, the decline in testosterone levels in men works differently. Typically, levels fall by only 1 to 2 percent per year after the age of 40, and low-T is certainly not inevitable. According to the June 2010 issue of the British Medical Journal’s Drug and Therapeutics Bulletin, about 80 percent of 60-year-old men, and half of those in their 80s, have testosterone levels within the normal range for younger men.

How do you treat low-T?

There are real health risks for men with low-T. The condition can be treated with testosterone replacement therapy (TRT), which requires a doctor’s prescription and careful monitoring. Medications come in the form of gels, topical solutions, transdermal patches placed on the skin, buccal patches applied to the upper gums, injections, and pellets implanted under the skin. The products are available under numerous brand names, including Androderm (marketed by Actavis Pharma), Androgel (AbbVie Inc.), Axiron (Eli Lilly USA), Fortesta (Endo Pharmaceuticals), Striant (Actient Pharmaceuticals), Testim (Auxilium Pharmaceuticals), and Testopel (Auxilium). If you’re thinking of taking testosterone to improve strength, atheltic performance, or physical appearance, or to prevent aging, note that the Food and Drug Administration (FDA) has not approved the drug’s use on those grounds. A 2004 report from the Institute of Medicine, Testosterone and Aging: Clinical Research Directions, called TRT for age-related testosterone decline a “scientifically unproven method.”

What are the side effects of taking testosterone?

There are some scary ones, including an increased risk of heart disease. (Here are signs you might be headed for a heart attack.) If you’re considering TRT, make sure you understand all the possible risks. According to the Mayo Clinic, these include the development of acne or oily skin, fluid retention, possibility of increased urinary symptoms (e.g., urinary urgency or frequency), aggressiveness and mood swings, worsening of sleep apnea, reduction in testicular size, breast enlargement, and increased risk of blood clots. In 2014, the FDA revised testosterone product labels to warn about a possible increased risk of heart attacks and strokes in patients. The FDA recommends that patients using testosterone should seek medical attention right away if they experience chest pain, shortness of breath or trouble breathing, weakness in one part or on one side of the body, or slurred speech.

Can I boost testosterone naturally?

Obese men have lower testosterone, as do men who smoke, are physically inactive, or consume more than 28 drinks per week. So losing weight, being more active and drinking less booze may boost your levels without prescription meds. (Here are 17 simple tips to cut back on alcohol.) According to findings presented at the annual meeting of the Endocrine Society in 2012, obese men who lost an average of 17 pounds saw their testosterone levels increase by 15 percent. A 2014 study published in the International Journal of Sports Medicine found that high intensity interval training (HIIT) can boost testosterone levels.

Are there bad candidates for testosterone?

Are there dangers to taking testosterone?

There’s a black-box warning on testosterone medication packages for a reason. Children who are accidentally exposed to the hormone are at risk of penis or clitoris enlargement, pubic hair growth, increased erections and libido, aggression, and aging bones, warns the FDA. So it’s really important not to apply the product to areas of the body that may come in contact with kids or pregnant women. Once the product is applied, the area should be covered with clothing, and hands should be washed with soap and water. (Check out the five ways you’re washing your hands wrong.) The area should be washed before any skin-to-skin contact with another person. Your bed sheets, pillows, and clothing may have testosterone on them, so warn anyone who comes into contact with them of the risk of exposure.